First, will be the displacement of jobs for a wide swath of Americans. Trucking, shipping, and taxi drivers (including Uber, Lyft and the like) will be hit hard. No doubt the car companies themselves, regardless of how quickly they can convert to full autonomy, will struggle with the dwindling size of the fleet — by some estimates only 10% of the current cars on the road — that will be needed to service the population. All people deriving their livelihood from driving people and things from place to place will need to adapt. It may not be easy, but it’s not like it hasn’t been done before.

The benefits, however, far exceed these disruptions So much so, that in a just few decades, people will wonder what the fuss was about. Here is what we can expect:

A million lives saved per year

While it is true that cars have never been safer and the number of accidents per mile driven is way down from the height in 1980: 1.12 versus 3.36 deaths per 100 million miles traveled, it is still the case that over 35,000 people died in car crashes in 2015 alone. [source] And this is only for the U.S. If you consider the worldwide loss of life in auto accidents, the number soars to more than 1.3 million each year.

The computer driving your car will be better equipped than you at handling a wide array of hazards and dangers.

Not only can autonomous cars anticipate conditions far better and react more quickly than any human, there will be many ways in which the cars on the road will communicate with each other in ways we have only imagined. This will allow for decisions, both at the micro-level — in the car and at the macro-level — on the street or even citywide, that save lives.

That brings us to the next greatest improvement…

The end of traffic

That same orchestration that will allow your vehicle to avoid that pothole, construction zone, or accident will also end traffic. They will be able to speed up and slow down in unison as well as predict patterns based on past data and observation. Your robot car will remember not to take 5th Street through the park on the 3rd Thursday of the month when the bikers take over all lanes.

Sure, that’s when all cars are automated, but that is many years away. What effect can a single self-driving vehicle have on traffic? Turns out, it can still be quite large. A new study out of the University of Illinois at Urbana-Champaign suggests that the addition of just a small number of autonomous cars can ease the congestion on our roads.

It’s interesting that these improvements can occur even with a single vehicle in a flow of 20 other cars. And it’s also worth noting that the level of autonomy required to have this effect isn’t the kind that Waymo, Uber, and others are seeking to build — it’s more akin to the adaptive cruise control already featured in many higher-end cars. So while we might have to wait a little longer for all of autonomy’s effects to be felt, its ability to reduce traffic congestion could be here rather sooner than we anticipated. [MIT Technology Review]

Not only will traffic be reduced or nearly eliminated, speeds can increase safely and people can get to their destinations faster. In the future, there may not be set speed limits, but instead fluid guidelines based upon traffic, road, and weather conditions.

While our time in the vehicle will likely be reduced per the traffic mitigation topics above, the time we do spend in cars will be transformed. No longer will we have to sit forward and pay attention, crane our necks, and get stressed out. We will get this time back, and we can do with it anything we want. Want to work on your laptop, talk on the phone, play games, or read? You aren’t thinking big enough. Plus, as a recent article from The Atlantic City Lab, points out:

Less than 5 percent of survey respondents claimed they’d even attempt to get any work done.

How about sleeping? Having lunch? Catching up on that Netflix series? Playing Pandemic with three friends Having a wine and cheese tasting event on the way to the theater? Doing something else on the way to the theater?There are going to be whole new industries formed around furnishing and decking out our vehicles once there is no need for a steering wheel and other controls, instrumentation, even windshields.

It almost goes without saying (but shouldn’t) that a huge advantage to getting more cars off the road is a huge reduction in emissions. That will only be good for the air we breathe, our cities, and the Earth as a whole.

With some 800 million parking spaces in the U.S. it wouldn’t seem like it would be so hard to park, especially in cities. But for those of you who have spent time looking to park in major American cities, it can often be a challenge.

Charlie Gardner at the Old Urbanist blog provides this data indicating nearly 65% of downtown Houston is devoted to streets, parking, and sidewalks. While, where you live and work and shop might not be nearly so bad, I would imagine that finding parking isn’t one of those things you enjoy.

What could Houston do with all those red patches? I bet they could find ways to encourage business and residential productivity and growth — and maybe even up that park percentage.

Since roughly 90% of a car’s life is sitting parked, self-driving cars and the end of car ownership will signal the demise of the parking lots (and structures) as their utilization will be much higher — maybe as high as 90% of their lives. Hopefully this will usher in a renaissance in urban parkland, growth, and density.

We’ll all save money.

Once you factor in the purchase price, getting licensed and insured, adding gas, and providing routine maintenance you can see how cost estimates of about $0.58/mile can really add up. Once popular ride-sharing services ditch the driver, it is estimated that costs to the rider will fall below this threshold to as low as $0.35/mile. I’ve claimed for a while now that I have purchased my last vehicle (in 2014). If driverless car services are in place in the next 10 to 12 years, I won’t be made a liar.

Car insurance will be super cheap, unless you drive.

Because there will be so few accidents caused by or even including self-driving cars, those who want to drive will have to pay exorbitant amounts to remain insured. It would just be current day prices. Auto insurance companies will be so desperate to cling to revenues lost that they will charge the remaining drivers more — and frankly — rightly so. They will be the ones texting and driving, falling asleep at the wheel, or otherwise mucking up the roads for everyone.

According to the National Highway Traffic Safety Administration (NHTSA), U.S. motor vehicle crashes in 2010 cost almost $1 trillion in loss of productivity and loss of life. Almost $900 billion of that are purely economic costs — or almost $900 per U.S. Citizen. Besides the terrible cost of human life that auto accidents present, there are also significant draws on productivity and the economy as a result of auto accidents. For non-lethal accidents, there is time off work either in the hospital — using resources there — or bringing your car to the shop. And while car repair is a job creator, the act of fixing a broken car doesn’t enhance the productivity of a society.

What else can we expect?

There are likely benefits that we aren’t even anticipating at this time (and probably some pitfalls). Here are a few more thoughts on what to expect:

There will be some significant hurdles to get over with regards to public adoption, as many recent polls suggest the U.S. population is not yet ready to give up the wheel.

Three out of four U.S. drivers said they would feel “afraid” to ride in self-driving cars, according to the AAA survey released on 1 Mar 2016. Just one in five said they would actually trust a driverless vehicle to drive itself with them inside.

There was likely a time when people didn’t trust calculators to add and subtract for them either. I’m sure we’ll soon be in the “break-in” period, where people get used to the numerous semi-automated features already in place on many vehicles, as a way to build trust. But as I like to say, autonomous cars don’t need to be 100% perfect in order for them to be a vast improvement over human drivers.

But even as some folks are vowing to hold firm to their steering wheels, there are just as many people who have already eschewed driving and make use of the sharing economy.

Some of these are up to us — how we change our behavior and how rapidly those modifications occur. On the one hand, we’ve had a cultural love affair with the automobile since early last century. On the other hand, the benefits will be so pronounced, that once the tide turns, it will quickly overtake the status quo and become the new normal. 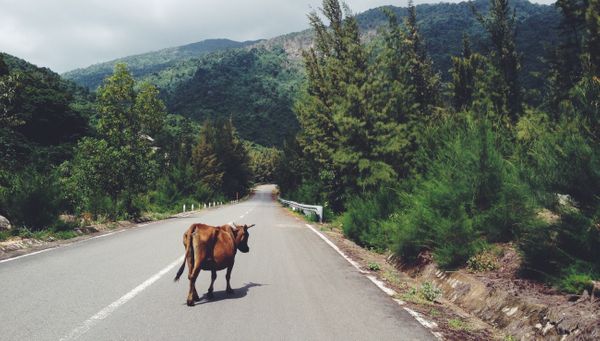 Or, how I learned to stop worrying and love vegetables

A renewed focus on content without the distraction of customizing and maintaining blogging software.